Heart of Swine is the debut novel from Creative Writing and English Literature graduate Freddy F. Fonseca which was published on 17 September 2021.

On 8 April 2022, Freddy held a launch event for Heart of Swine at Accelerator, London Met’s business incubator. During the evening guests enjoyed an introduction and reading from Freddy, a promotional video trailer and a book signing.

We were thrilled to have Freddy host the launch event with us at Accelerator, having discovered Heart of Swine when Freddy took part in the 2021 Christmas Market run by London Met’s student enterprise team at Accelerator.

“I am feeling blessed to have met the student enterprise team at the Christmas Market, without them, the book launch would have probably been held in a carpark!

Visit Freddy F. Fonseca’s website to find out more about Heart of Swine 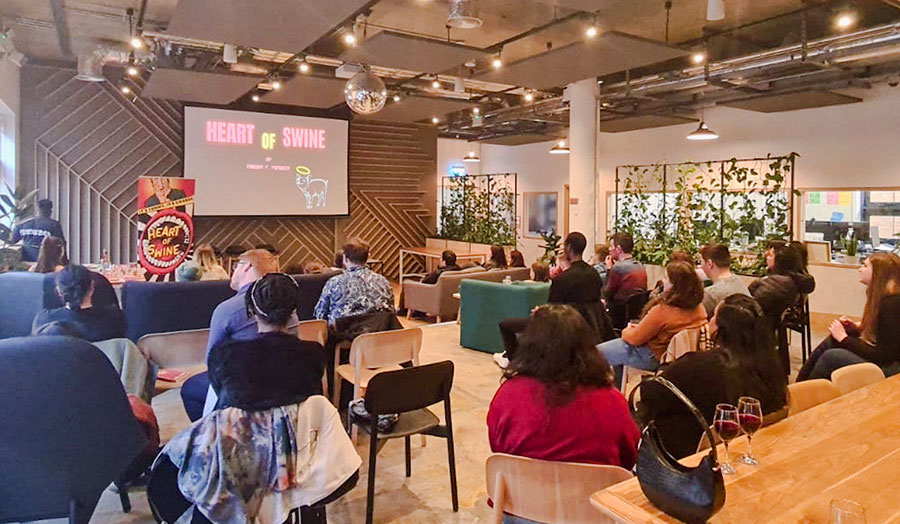 About Heart of Swine

Heart of Swine depicts an environmental dystopia where Captain Grunter, the last remaining pig on Earth who just happens to be blessed with superpowers. Powers he would use to avenge the extermination of his species were he not to get tangled up in an all-too-human web of greed, lust, and indifference.

After world leaders resort to using global warming to their benefit in order to stop people freezing to death, their plans to warm the planet through the overarming of pigs works a little too well. The world falls into disaster in which people have to deal with the after effects of their actions. Heart of Swine offers a fascinating and witty take on the world’s current climate change challenges.

Visit Freddy F. Fonseca’s website to find out more about Heart of Swine